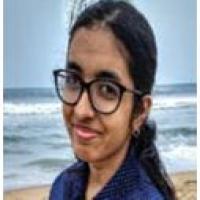 My aim is to pursue Molecular Genetics and serve humanity by ridding it of the various diseases which lurk behind the industrial façade. I began thinking about this after I watched few documentaries on PBS NOVA like “Cracking your Genetic code” and others. I have given a couple of seminars on this topic which have reinforced my knowledge. Books like “Herding Hemingway’s Cats: Understanding How Our Genes work” by Kat Arney and “Junk DNA” by Nessa Carey have encouraged and inspired me. My major source of learning is edX where I am currently on a course titled “Introduction to Biology - The secret of life” which is run by MIT. My achievements so far: I presented my project “Turmeric as a bio pesticide” in Maker Fair and Google Science Fair 2016. In the same year I participated in Google Code to Learn and was selected as a ????nalist. I was chosen as a star correspondent by Times NIE in 2017 and wrote articles to the newsletter frequently. As a part of the same, I participated in a one-day workshop on Hotel Management at IIHM (International Institute of Hotel Management). I secured a silver medal in Prathama Sanskrit and distinction in Dwithiya Sanskrit, both of which were conducted by Sri Surasaraswathi Sabha. I secured third place in Sign Bee 2015 and 2016. I scored 622 on 625 in SSLC board exams. One of my prime hobbies is Poetry writing in which I have secured first place in all the three years of high school. The NIAS – MAIYA PRODIGY mentoring program helps students who are keen to learn by providing them lifelong mentorship. This mentorship will provide me an opportunity to reach beyond my scope of self-learning and thus enable me to learn about genetics, not just theoretically but practically by a mentor who will introduce me to new developments around the globe.