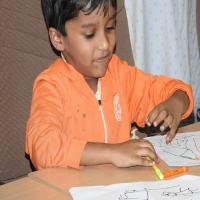 Have you heard of “wake turbulence”? Adhrit is the best person to answer this question. He is a 6 year old self-motivated on a quest to explore and find out. Most of his sentences are questions, and will not be convinced until a logical reply is given or found out. He has shown a keen interest in learning about insects, rocks, all types of animals, Geology, Palaeontology, aircraft, robots, astronomy, gemstones, Archaeology, world history specifically wars, his interests are varied and too many to list. He loves setting up small electrical circuits; one of them is a detector of radiation from appliances. He has authored and illustrated a technical book (drafts) on air crashes, another one on world history and wars around the world, which is based on his travels so far.Has huge love for nature, and a strong opinion as to whom we should vote for as a leader for the country, one who has policies for nature conservation. The one thing that upsets him the most is when people cut down trees. He loves to go to Kung-Fu lessons and has a maroon belt-I in the same. He loves music and insisted to learn to play on the violin, but owing to his age, has begun his musical journey with piano lessons. His current projects are too many to list but aspire to build a robotic puppy in the near future.