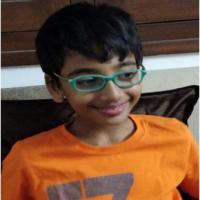 Avyan has been allocated a learner profile in his school and he has keen interest in Mathematics, Data Analytics, Indian Mythology, Chess, Cricket, table tennis and Badminton. He loves playing all outdoor sports as well as board games – Chess, Monopoly deal, Mastermind, Stratego, Scotland Yard are among his favourite board games. Avyan is a voracious reader and reads about mythology, autobiographies, chess books, history and various fictional series. His favourite authors are Ruskin Bond and Sudha Murthy. In 2015, Avyan had taken Stanford Binet 5 IQ test in Singapore and has beenassessed with IQ score of 146 with 99.9percentile ranking. He received membership of MENSA Singapore on 21stMarch 2015. He was the second youngest Mensa member in Singapore. Avyan has also got admission in Center for Talented Youth, John Hopkins University and he is pursuing various online courses with JHU. So far, he has completed courses in Elementary Problem Solving, Cryptography and Scratch programming.He was also enrolled in Education Program for Gifted Youth (EPGY) atStanford University's Gifted and Talented Educational portal. Avyan is learning chess for past 4 years and has keen interest in the game. He secured second place in U-7 age category in Karnataka state championship. He also represented Karnataka in U-7 National School Chess Championship and secured 14th place. He has FIDE Rating of 1196 (as of 31st May 2019).